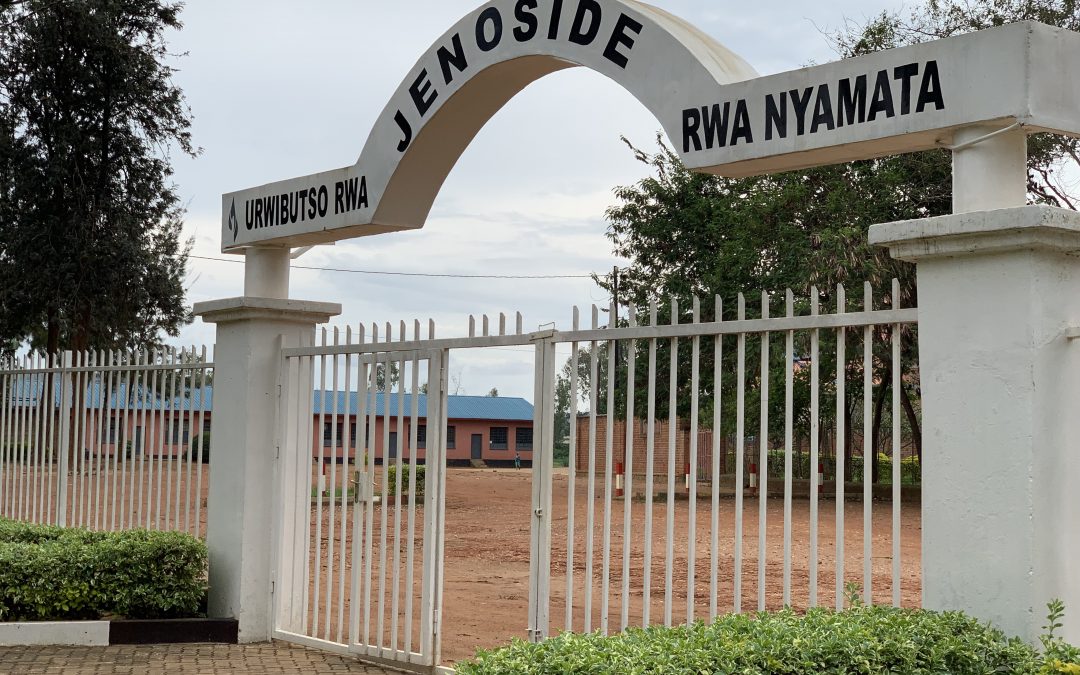 Entering the musty shack next to the church in Ntarama was like entering a tomb. The narrow aisle where I stood between the kind of shelving where most Americans would store Christmas decorations or ski clothes was stuffed with scraps of rust-stained clothing from blood—a paper thin substance, thick with human suffering. As I exited that windowless hovel, the sky cracked open and seemed to rain on my behalf—relieving only some of the tension.

With so much emphasis on survivors, there is less information and coverage about what inspired some Hutu to resist becoming killers.

Visiting these spaces where genocidal massacres were executed, I wanted to be angry. I wanted to hate all the killers and weep for the victims, but I could not, at least not whole-heartedly. We were spending time with survivors, and some of these survivors had Hutus to thank for their lives. For all the carnage of the Rwandan genocide, the Hutu Power movement had failed to wipe out all Tutsis, partially because some Hutu rejected genocide ideology and risked their own lives to save even one other person’s. 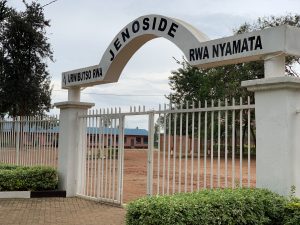 Guided by books like Mahmood Mamdani’s When Victims Become Killers, we embarked on this educational and personal journey in part to understand what makes the unthinkable (genocide against your friends, neighbors, and peers) thinkable. If Rwandans can understand the conditions that made the genocide possible, then perhaps they can prevent future genocidal actions and heal enough to realize the nation’s goal of becoming “One Rwanda.”
Genocides are driven by binaries whereby the opposing group becomes so dehumanized that normal people can become genocidaires. In the wake of such horror, the term genocide itself has a tendency to reproduce dichotomies, such that we imagine all members of a community to belong to one side of a binary: victim/perpetrator, minority/majority, Nazi/Jew, or Hutu/Tutsi. The black-and-white simplicity of binaries makes it easy to demonize killers and grieve victims. However, numerically and logically, the full truth must be grayer than a black-white dichotomy indicates: If one-seventh of the population were victims (Tutsis and moderate Hutu) and two-seventh perpetrators, as we learned in Rwanda, what was the remaining four-seventh of the population doing? With so much emphasis on survivors, there is less information and coverage about what inspired some Hutu to resist becoming killers. I became interested in what motivated the resisters.

Resistance during times of genocide—especially genocide of this nature involving machetes and neighbors—was incredibly difficult because these were extraordinary times. Genocide typically occurs in the context of war (as it did in Rwanda with the 1990 RPF invasion). There is a feeling that one must kill or be killed, which generates both a safety and moral imperative. Additionally, the Hutu who resisted had to overcome decades of constructed race. When the Belgians obtained Rwanda from Germany after WWI, they employed a mixed direct/indirect ruling over Rwanda. Framed as a separate race with different superior origins compared to the Hutu, the Belgians appointed the Tutsi to leadership positions (though always subordinate to their white colonizers). The Belgians distributed ID cards in 1933 to distinguish Hutu from Tutsi based on physical appearances like nose length and height.

It should be noted that centuries of intermixing between Hutu and Tutsi made these physical distinctions ill-defined at best. In 1959, when the Rwandans overthrew their colonial rulers, the previously subjugated Hutu equated their Tutsi leaders to the Belgians they had just overthrown. When the Rwandan Patriotic Front (RPF), comprised primarily of Tutsi refugees invaded in 1990, it surely sparked traumatic memories of the 70 years of racialized distinction for Hutu; from their perspective, the Tutsi became a foreign invader once again. Within the context of the RPF invasion, Hutu radicals (called Hutu Power) pumped propaganda through the Radio Télévision Libre des Mille Collines that dehumanized Tutsi, describing them as cockroaches. With this history and deep internalized chasm, before one could resist, they had to overcome decades of thinking inside this Hutu/Tutsi dichotomy.

In my research, I found that a number of factors could lead people to resist participating in genocide. One could be education—such that knowledge of the fraught colonial history would make one less susceptible to propaganda (although many educated Hutu did participate, so education was hardly a guarantee). According to human rights scholar Ruby Maguire, other factors included physical resources and access to local power. There was great economic gain when pillaging a neighbor’s home, so those who didn’t economically need to may have found it easier to resist. Maguire also identifies that local leaders like mayors or Hutu burgomasters (specifically in Giti, Musambira, and Taba) were the most common organizers of resistance, whereas people with no prior power may think that partaking in the genocide could be an opportunity.

Maguire’s conditions pertaining to power and economic resources are interesting, but they don’t offer the framework to make sense of the personal justification for resistance. If we were to think critically about if we, ourselves, were to resist genocide, Maguire makes it seem external such that if you were only rich or locally influential enough, you could resist.

Ernest Mutwarasibo’s dissertation Ordinary Choices in Extraordinary Times sheds light on the more internal sphere that may inspire anyone regardless of income, profession, or location to resist. Mutwarasibo argues that the people who resisted the Hutu/Tutsi dichotomy were able to do so because they prioritized some identities as more salient than race/ethnicity. “Hutu Rwandans who resisted sought to go beyond that binary classification of Hutu and Tutsi ethnicities while also submitting to an alternative identification.” For example, some Hutu women appealed to their maternity or potential maternity to justify to perpetrators or themselves why they could not partake in the killings. Some women felt that by bringing life into the world through the quite painful process of childbirth, it was unfathomable to end life. Religions like Islam and Christianity (specifically Pentecostalism); seniority (whereby a Hutu viewed themselves as a moral elder in the community); and profession (especially in the medical and religious fields) were other powerful, intersecting identities that inspired Hutus to resist the genocide.

I am not naïve enough to think that genocide won’t happen again; but I want to know when it does, how it can be resisted. Diving into stories of resistance in such a brutal context, I am reminded that for most of our lives we live in a gray area. Dichotomies like Hutu/Tutsi are easy to radicalize. We must recognize that we are intersecting identities. We are not just our race, gender, professions, or economic statuses. In specific circumstances, any of these identities could be radicalized for terrible ends. Rather, the Hutu mothers who rescued children as their own because they were acting on their own maternity must inspire us. Dichotomies are hollow and simplifications. Intersecting identities, however, are the way to recognize the humanity in our peers and treat our peers accordingly. 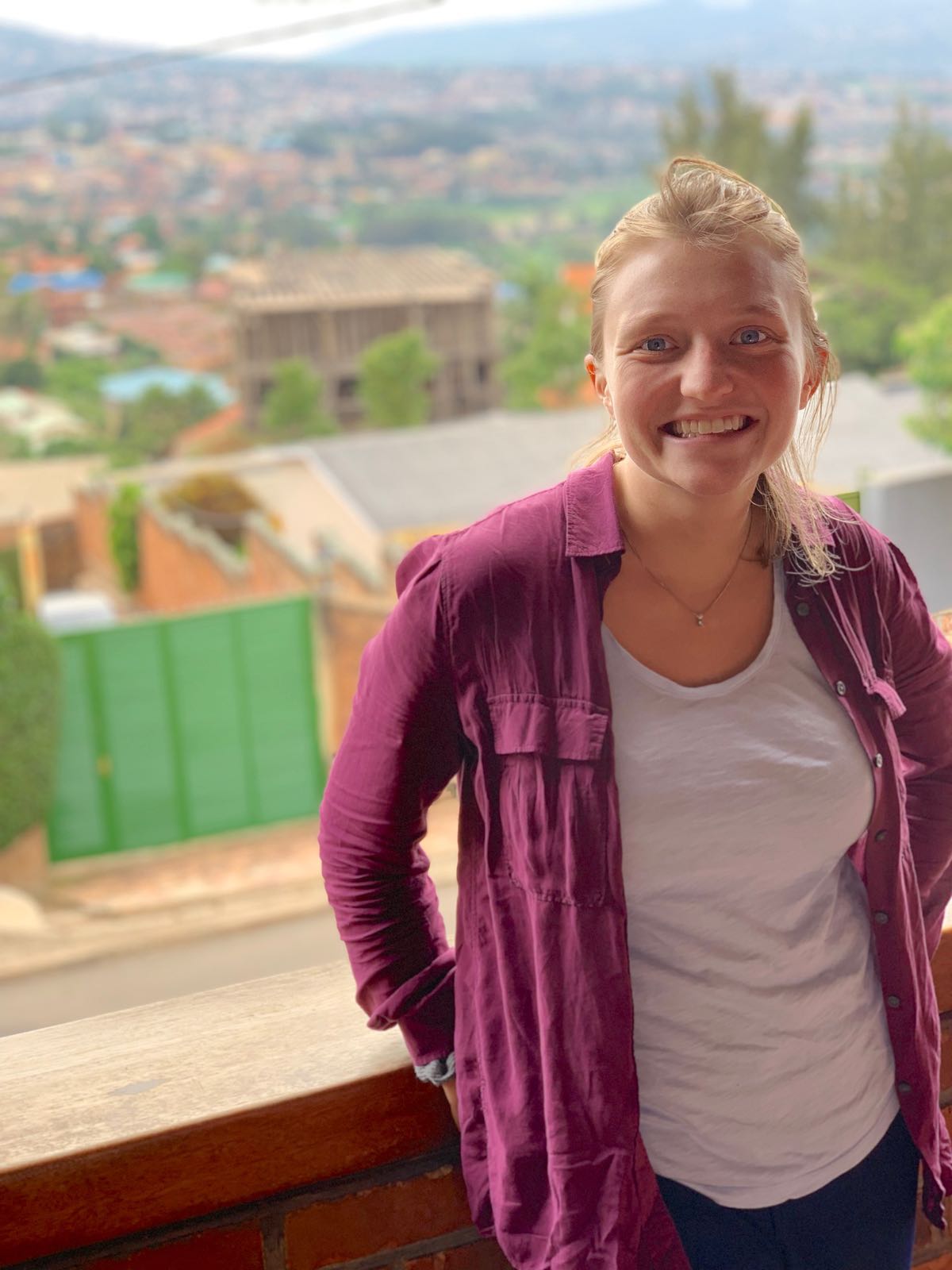 Lessons that Will Stay with Me

Professor Nancy D. Wadsworth
I hope to continue refining the class in coming years, but I know that the profundity and sense of emotional community that marked the first time with this remarkable group of students will be forever impressed on my memory.

Honoring the Dead? Struggling to Understand the Presence of Human Remains at Rwandan Genocide Memorials

Ontario Duley
The Rwandan government argues that the display of human remains is one necessary effort to counter denialism about the Genocide Against the Tutsi. Thus, it is not without careful consideration that bodies are placed on display.

Challenges of the Victim-Perpetrator Binary

Britta Petersen
Defining roles in the civil wars and genocides is much fuzzier than the official government narratives would lead us to believe.

Austin Clapp
In Narcisse’s story, this truly seems to be what has caused him the most suffering: the feeling of having everything that was once his being ripped away with no ability to control the outcome.

The Catholic Problem in the Rwandan Genocide

Tom Oexeman
As we learned, some of the deadliest massacre sites were Catholic Churches, most notably Ntarama and Nyamata, and partly because their priests abandoned their own parishioners or actively enabled genocidaires.

From the Fields of Genocide: How Individuals Accepted Genocidal Ideation in the Genocide Against the Tutsi

Blake Schapiro
Examining the role that propaganda played in the genocide and focusing on the internal psychological processes that translated genocidal ideation into active participation in ethnic cleansing.

There were many echoes of the Holocaust in our tour of Rwanda’s more recent trauma.